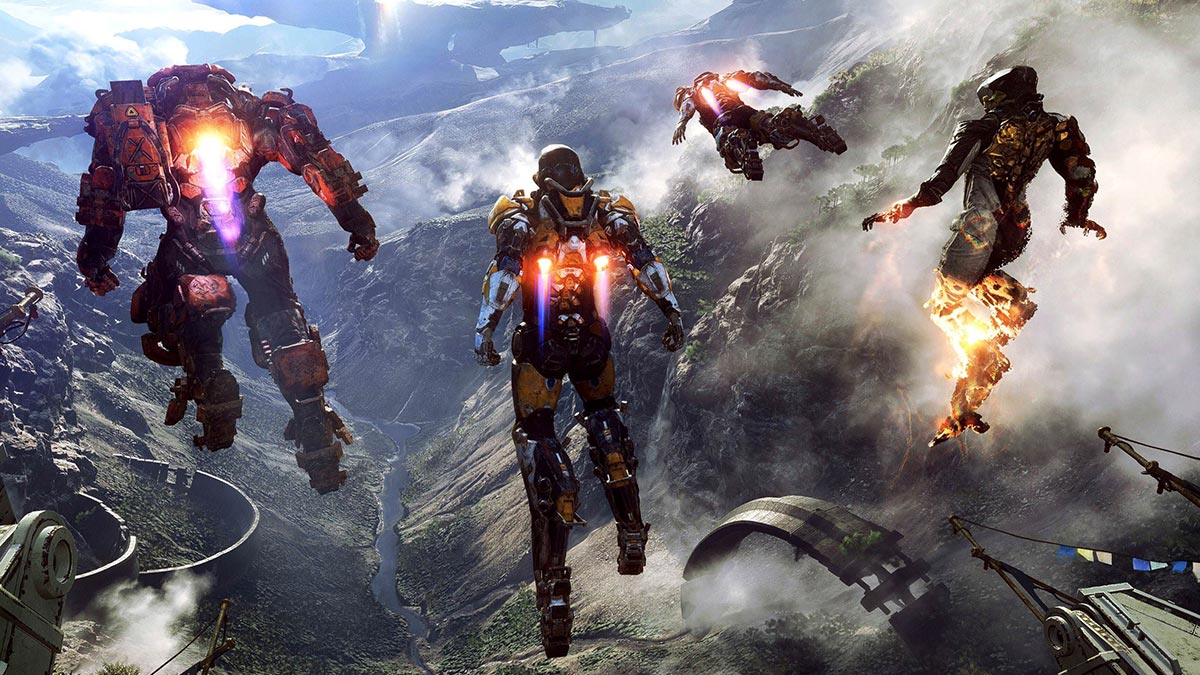 In the world of video games, cinematics and cutscenes play a crucial role; they can help to flesh out the story, propel players along into the next gameplay segment and provide emotional connections to other parts of the game.

For the recently released Anthem, developer BioWare brought CVD VFX on board to help with a range of cinematics in the game, a project that would see the Vancouver studio spend several months collaborating with the developer’s creative team on a unique process of enhancing game footage renders and generating bespoke imagery. Here’s how they did it.

One of the drawcards of Anthem is its combination of third-person shooter and action role-playing game elements, as players – taking the role of ‘Freelancers’ – enter conflict with the ‘Dominion’ on an unnamed alien planet.

Those plot points were things CVD VFX had to keep in mind when it was asked by BioWare to contribute to cinematics for a backstory and battle of the destroyed city-state Freemark. For that, they would take original Frostbite game engine renders of cutscenes and add layers of extra effects and enhancements to them.

The studio was also tasked with “exploring ideas on how we launch from the Fortress of Dawn to the Trial of Might,” says CVD founder Chris Van Dyck. “It was about working out how we do that in an organic, intense way.” This second request led to the creation of a ‘boot-up’ sequence found in Part 7 of the game – The Javelin of Dawn.

For the Freemark cinematics, in particular, BioWare was looking to add a new level of depth to the scenes. “From a tone perspective, what we were hoping to do was to create a fully rendered sequence that was slightly in a dreamy style compared to the way that the engine renders light and colour, but still faithful to the content of the engine,” shares John Campbell, producer of external development at BioWare. “I think we hit that stylistically really, really well, definitely with CVD’s assistance.”

That’s a wrap-up echoed by John Mayhew, BioWare’s development director of external art, who also notes that the game maker went to CVD VFX for their expertise in environment visual effects with the aim to add a sense of scale to the cinematics. 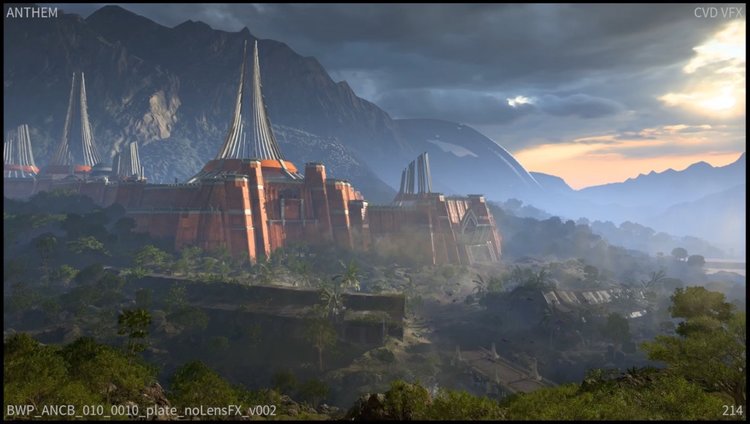 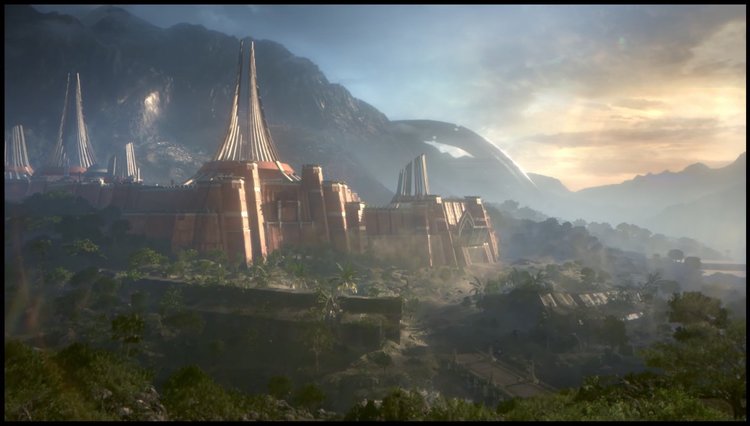 Sometimes that kind of epic grandness to the environment is frankly just really hard to get in real-time because of how large of a space you’re having to have running all at once. So, we were able to, on CVD’s strength with digital production mattes and backgrounds, make sure that we were getting that depth, and we were getting the detail where needed.

With the brief settled, how did CVD VFX actually pull off that work? Sequence lead Mike Wearing says that several artistic and technical methodologies were undertaken, and, surprisingly, it was not dissimilar to the process of live-action visual effects and compositing that CVD is so familiar with.

“There was an overall treatment for colour and lens effects as a starting point which could be dialed and adjusted as necessary,” Wearing explains. “From there, we started targeting sequence or shot specific items in the cinematics that we could improve versus what was output from the game engine. Things like fire and smoke were replaced or enhanced with photographic or more robust CG elements.”

For most shots, CVD VFX would receive at least two ‘plates’ that were Frostbite renders, one with game engine lens effects and one without, although sometimes there were more plates that could then be blended together.

An interesting challenge came from the fact that, since certain elements in the rendered plates – such as explosions, impacts, muzzle flashes and shockwaves – were dynamically generated in the game engine, their timings and positions would change slightly in each render.

To deal with that, CVD VFX built setups that could be quickly re-worked as necessary if a new plate was received. “We needed to enhance the look while not deviating too far from the original flavour of the game engine elements,” notes Wearing.

“Our approach was to start by categorizing the shots based on what was needed in each,” adds compositing supervisor Blair Richmond. “Some required full Houdini sims with geometry delivered from BioWare to allow for proper hold-outs, while others required matte paintings for the sky and backgrounds. Categorizing the shots allowed us to make particular requests to BioWare for the elements needed for each shot type.”

“I have a long relationship with BioWare and we’ve ironed out a really fun process. It’s really focused on ‘making things look cool’ and it’s a studio favorite,” comments Van Dyck, “At the end of the day, we’re a clear partner, involved at the boarding stage, as opposed to coming in to finish up some shots at the end.”

One of the most complex sequences saw the destruction and subsequent fall of the ‘Strider’ that rams through the walls of the city of Freemark. “This sequence was the real hero of that cinematic and required all our bells and whistles,” says Richmond.

“We needed full geo exports and cameras from BioWare so we could get Houdini sims of fire and smoke as the Strider turned its head, smashing through the wall. We turned to Stormborn, a group of local FX specialists, to take on these simulations. There was also a barrage of missiles and gunfire hitting the Strider, explosions with fire and smoke on the walls of Freemark and, in some shots, sky replacements. All of this made for some of the most difficult but also rewarding shots for our team.”

It turns out, that was one of BioWare’s favorite final cinematics shots, as well. “We had asked CVD to do a 3D effects simulation of really hot, greasy fire coming through the prongs of that ram,” recalls Campbell. “And I knew that was going to be a difficult shot to pull off from an effects perspective. What I had in my mind for it was something really epic, and CVD nailed it, so I was really, really happy with how that turned out.”

Whilst the cinematics represented the bulk of CVD VFX’s contribution to Anthem, their first requirement for the game was actually the boot-up sequence that sees the player enter the gateway to the Trial of Might. “So, you’re in your mask,” describes Van Dyck, “and then ember trails start to erratically fly around. As this starts to build up, your whole world starts to fall apart. The mask starts to deconstruct and it actually start to crumble, pulling you out with the chunks of your mask and in a chase throughout a hostile environment toward what looks like your destination – a blue beacon of light. We used a lot of reference to drive the feel of what you pass through, such as hostile mountains, lightning, intense and nebulous clouds, gnarly roots and a lot of fiery embers in the sky.”

“We produced storyboards, concepts and previs to land on the speed and timing,” continues Van Dyck, who says CVD who says CVD VFX had to consider the storytelling points of the player moving along a map, and what their point of view would be inside one of the powered exosuits that are a significant part of the game. “We worked with Day for Nite to get the final previs locked down and it was an awesome experience getting their expertise on the camera.”

“Because the distance travelled was so long, we then spent a while in layout, making sure we always felt that sense of speed but also be able to keep the claustrophobic and dangerous environment. The geometry and camera work was done in Maya, the particulate trails were completed in Houdini, while the rest of the scene, nebula and particulates were realized in NUKE with deep renders.” 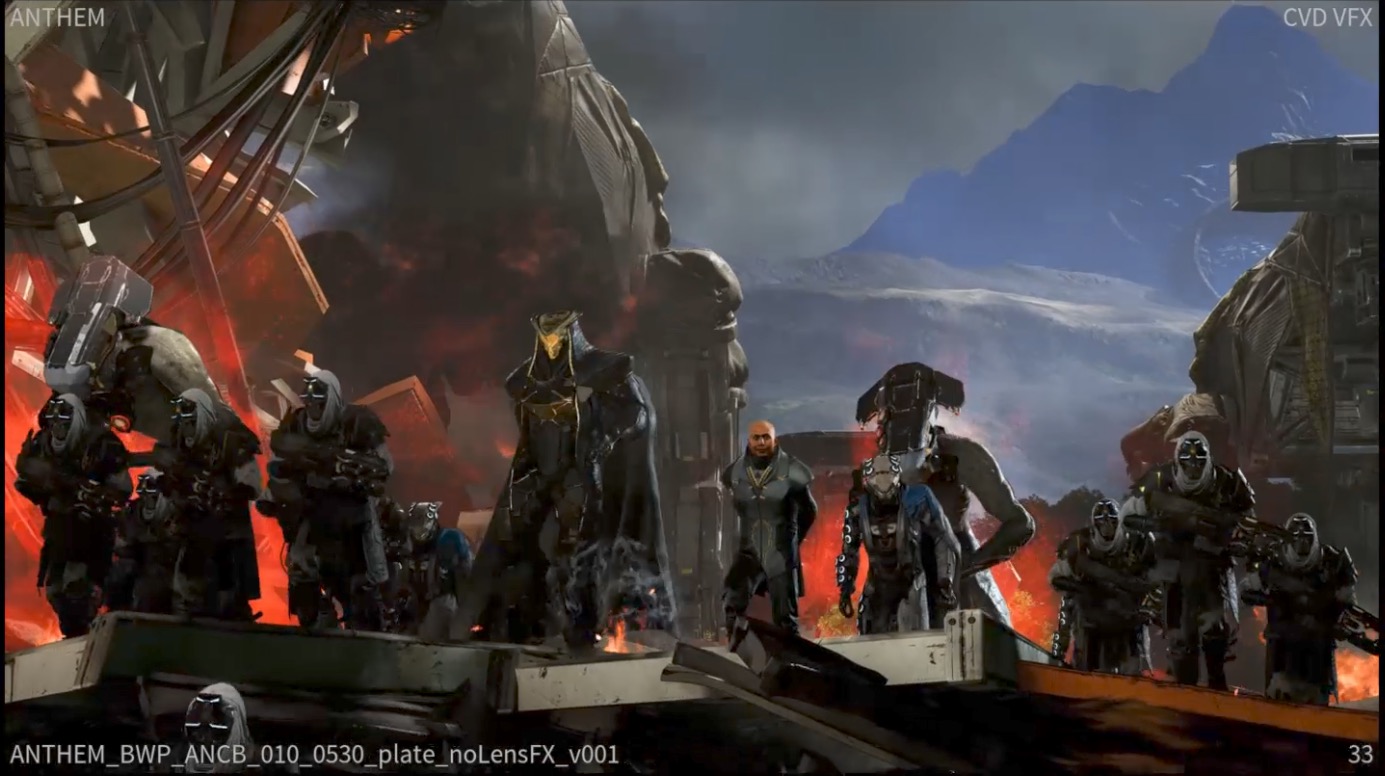 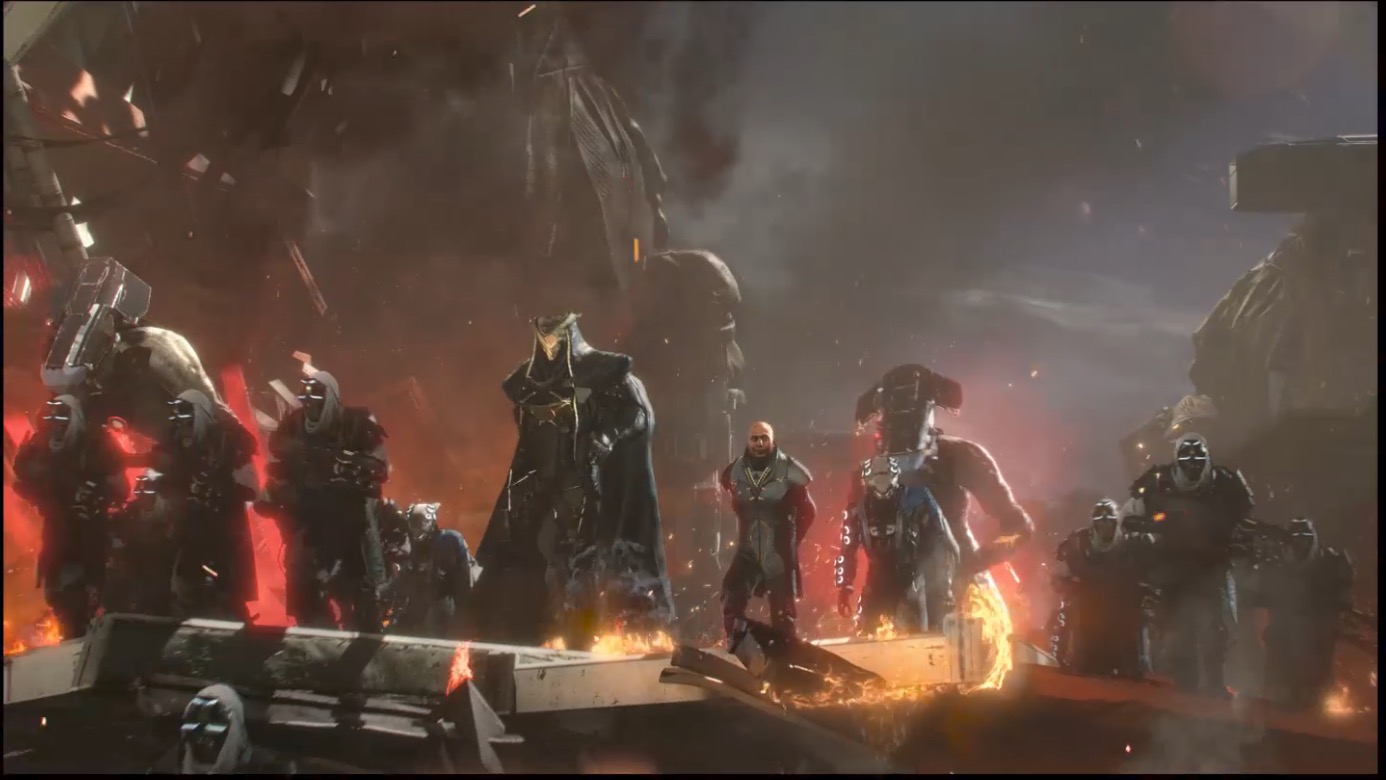 ADDING TO THE STORY

Indeed, storytelling was at the heart of everything CVD VFX contributed to Anthem. Having been brought on early in the game’s production, CVD VFX were, says BioWare’s Campbell, “very much creative collaborators with us, making contributions on how every shot could be enhanced with visual effects and compositing.”

“One such shot that comes to mind is where we reveal the invading army for the first time. The first Strider that we see in the distance, essentially it’s invisible in the environment, but CVD was able to pick that out with enhancements of lighting and atmospherics, and they actually added a glint on the armour of the Strider. So, as the camera pans over the environment, if you’re watching closely, that Strider actually pops out just for a couple of frames. And it really hints at the size of the invading army and it’s exactly what we were hoping for. When we first envisioned this sequence it wasn’t working perfectly as rendered, but when CVD put their fingers on it, it worked out brilliantly.”

Another scene that ‘shone’ thanks to extra enhancements from CVD was, according to BioWare, one that sees a close-up of Dominion leader Doctor Harken surveying the damage his side has wreaked upon Freemark.

“With all the smoke and embers in the air,” says John Mayhew, “that just really helped sell the story that this character was capable of doing this much destruction, while being very calm at the centre of it, and surrounded by powerful and evil allies. CVD was able to take that from, ‘This will be a beat in the story’ to ‘This is actually a strong piece introducing this character.’”

Similarly, there’s a final moment in the cinematics that shows Freelancer Adams trying to fathom the extent of damage to Freemark. “He’s standing there, and he looks back as the city is destroyed,” recounts Campbell. “It’s very subtle, but you can see his shoulders slump. And CVD added in all kinds of fire and embers and smoke and the dark atmospherics around him. You absolutely get a sense of the destruction and the failure of hope. It really sells the final result, which is that the Dominion has succeeded in accomplishing their goal. It’s a beautiful moment.” 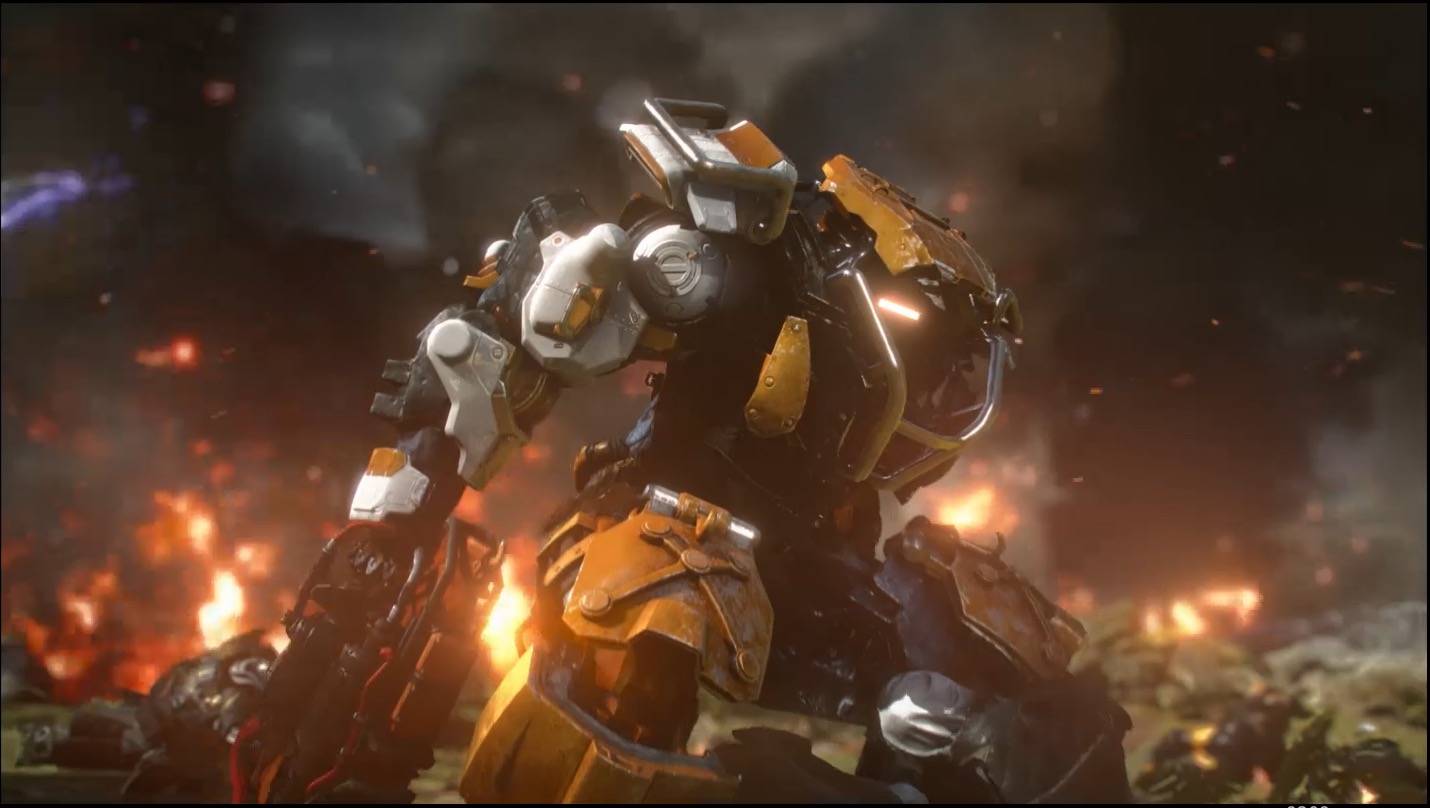 In fact, it’s so good that we took a still frame from that as our virtual film poster. We’re super-proud of that shot.